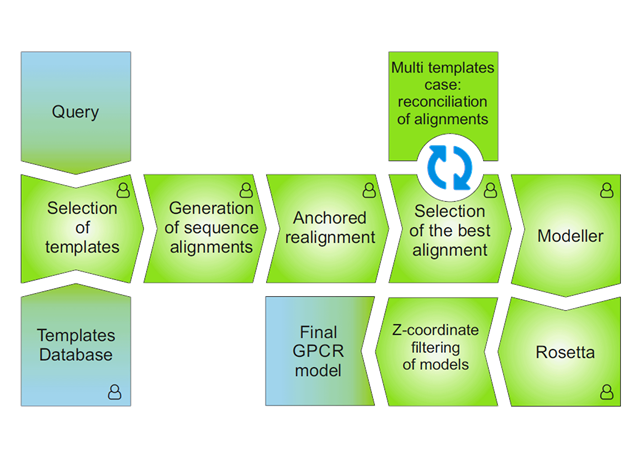 In all above methods, MUSCLE – a program for generation of sequence alignments (R. Edgar, BMC Bioinfo. 2004, 5(1), 113) is used. For every query-template sequence alignment a sequence global similarity and sequence identity score is computed and the best alignment is chosen.

Original aligning methods will not give always a proper alignment of all GPCRs sequence motifs and introduce gaps inside TM helices. To solve this problem, GPCRM performs an automatic adjustment of the alignment generated by each method (anchored realignment) which prevent misaligning of important functional motifs of GPCRs and occurrence of gaps (longer than 1 residue) inside the TM helices.

In rare cases, when no consensus between sequence alignments of multiple templates can be found, the 'structure-based' consensus method is used. Here, the best alignment of the most similar template is used to predict the location of TM helices. Then, remaining templates sequences are fitted based on the structural alignment of all GPCR templates available in PDB.

Loops derived from the alignment are refined with two methods:

Loop-modeling performed by either Modeller or Rosetta originally do not involve information about location of a protein with respect to the membrane. Consequently, some long loops and especially N and C-termini can be falsely introduced inside the membrane during the modeling. Such loop models are filtered out according to the information about the location of a template structure in membrane derived from the OPM database (M. A. Lomize et al., NAR 2012, 40(D1): D370–D37).

GPCRM provides as a result 10 best protein models which are the top-scored models according to the below energy terms:

The job will be run in 4 steps. A user can change input data in every step to improve the modeling results. After introducing changes the 'Next' button should be pressed to proceed to the next step.

The same as in Auto mode - see Auto mode for details.